I have been on a film use slump.  I have a closet full of film and I just have not been shooting film for the last six months.  Why, I bought a full frame Nikon D750 and two lenses in May six months ago and spent the whole summer and September using-testing it.  Then I sold the D750 and lenses and bought a Sony A7iii.  And I have been testing it for the last two months.  Yesterday after writing the previous post about how it was hard to love the Sony, today I thought, “Use a camera you really do love and have some fun”.  So I got out my original Minolta 600si that was loaded with Portra 400 and got out my best, but heaviest tripod and started shooting.  At first I did not get out the tripod out of laziness.  I have learned in the last few years that if you want to get the best flower and plant shots a tripod helps.  When you are doing close ups it is always best to have the camera rock steady.

One of the great benefits of shooting film over digital is that you have to wait to get it processed and cannot edit it immediately.  What I mean is that you can have an enjoyable shoot and then keep enjoying yourself.  You do not have to feel obligated to edit what you just shot.  With film if you are using a good quality not long expired film likely all of the shots will come out.  Maybe some need tweaking a bit but I almost never have ruined shots any more.

The above shot was the fourth shot I took with this camera and when I saw it I just went, “Wow”!  Keep in mind this was consumer grade film from Wal Mart that was given to me for free and the processing was with a just OK lab.

When I get my film back from the lab scanned it usually is mostly processed and edited when I get it.  Sure I Lightroom it a bit if needed, but way more often than when using a digital SLR the film shots come out right from the get go.  And they are already in jpeg, plus I have the negatives or positives and a CD scan as back ups.

Back to why I love the Minolta 600si.  This thing was designed and made as an anti menu statement.  All controls are easy to use and this is a modern camera, auto focus with more than one point, adjustable metering with spot, center, and matrix, auto film load, advance, and rewind, top LCD giving you setting information, front and back adjustment wheel, even high speed sync on the flash.

All functions are obvious marked simple switches, dials, or marked buttons.  Things that are individual marked controls are AF mode (Continuous, Auto, Single), Auto focus area (simple marked switch with picture grams ), Exposure (spot, center, matrix), exposure and flash exposure compensation dials, just like todays full frame digitals the front control dial is for shutter setting and the rear dial for f-stop, there is a mode dial with program, A, M, S, and drive switch with double exposure, bracket, single, multiple, and timer.  In the manual it points out that if you have all the switches so they are either vertical or horizontal you are set on full auto and you can just point and shoot.  Full Manual is also very easy to activate.

Having individual switches and dials for adjustments means you just make one direct movement to change the setting.

If you want to adjust AF area you just move the setting lever.  Same with metering.  Spot, center, or matrix meter setting you look at the dial and either move it or not.  On the Nikon D750 or Sony A7iii you push the metering button and then change the setting.  With the Nikon D5500 you need to bring up the back touch screen.  Touch the place for setting, and then touch the setting you want.  It is certainly true that the digital cameras have more settings.  If you need those extra settings then the 600si won’t do for you.  Very likely you do not need them. 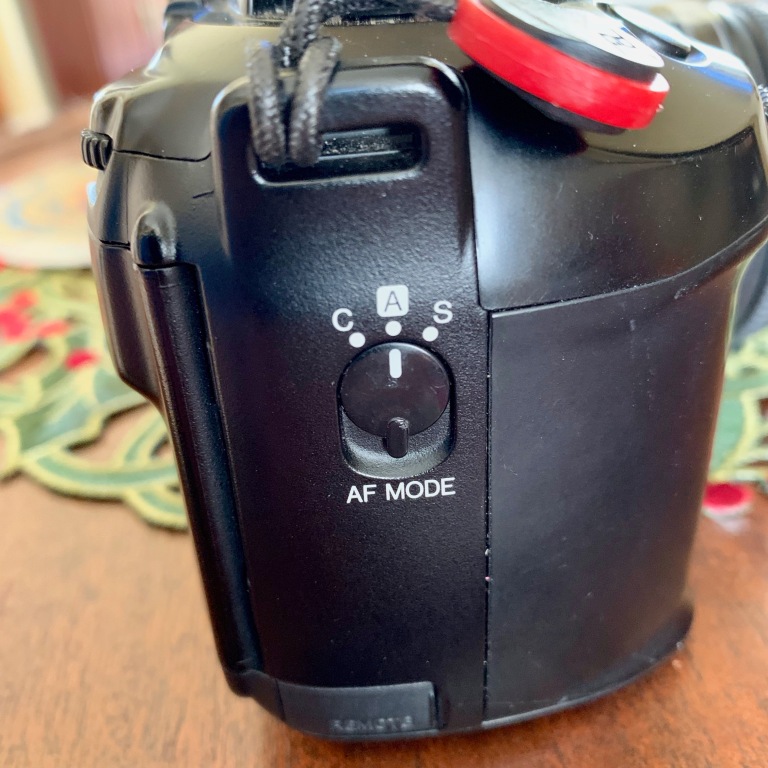 Same deal.  Look at the knob and set to what you need.  One movement.  No menu screen.

Or look at the way the 600si handles drive. 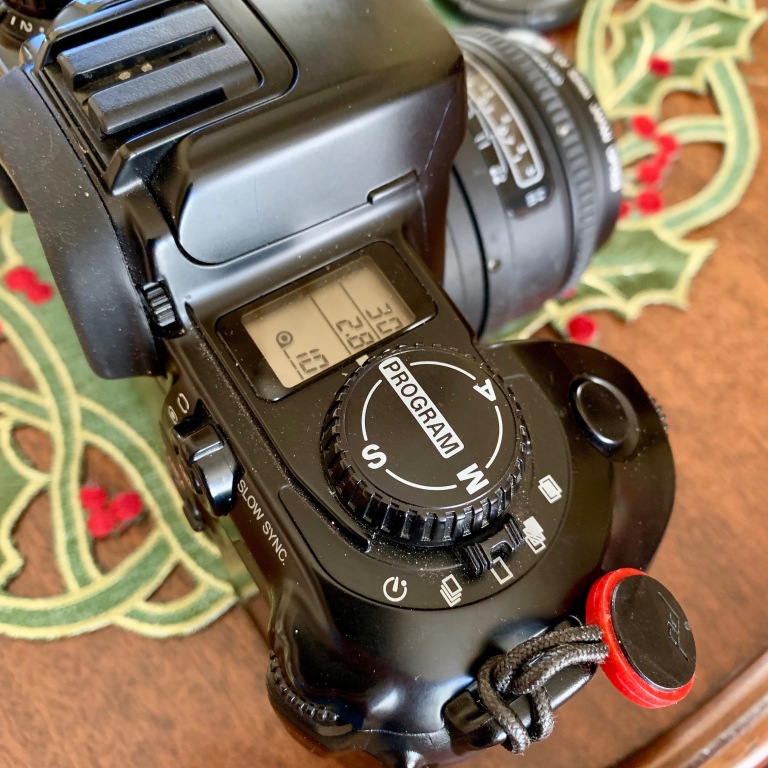 Simple and direct.  The indicator switch can be set to double exposure, bracket, single shot, multiple shots, and timer.  The Sony A7iii is about ten times this complex.  It has all the settings for this, but you have to remember where they are in the drive settings.  The Nikons are also much more complicated but much easier to learn than the Sony.

The 600si also has a built in flash.  I think this is a significant feature.  The Nikon D5500 and D750 do too.  But the Sony A7iii left it off.  Why?  They included it on my tiny compact camera and include it on the crop sensor bodies.  It is much better to use a full size flash, but the built ins are very good for fill in. 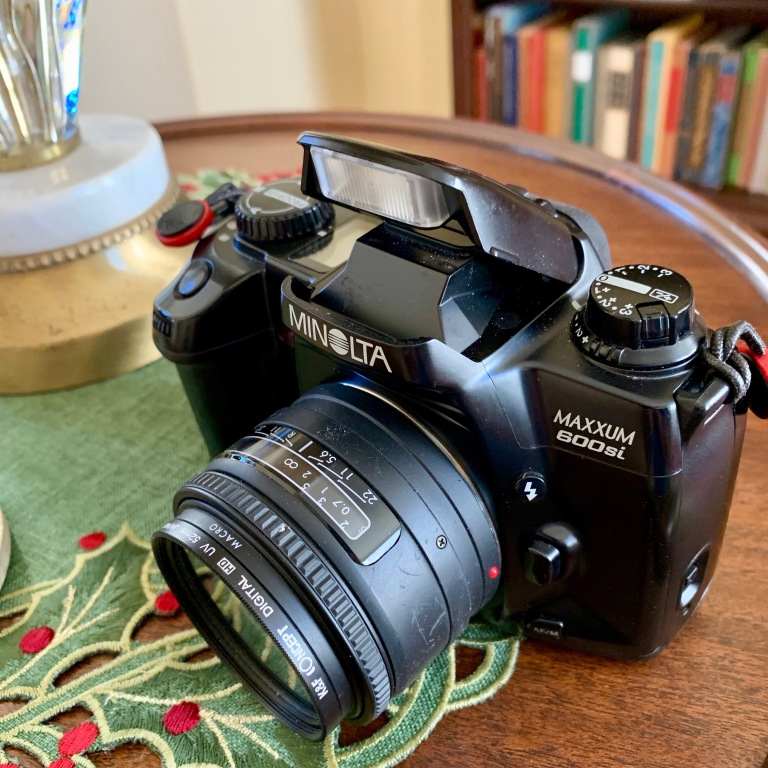 You will also notice the Minolta has a double dial for exposure compensation and flash compensation.  And the Minolta does high speed flash.  And very handily it has built in motor drive for loading, advancing, and rewinding film plus auto film speed.

Conclusions – To me the Minolta 600si is for the film shooter who wants automation plus manual.  So this camera is good for landscape, people, and wildlife.  Landscape is usually easy and all manual settings usually work fine.  But for people and wildlife it helps to have some automatic features.  As a bonus, with an adaptor you can get the AF lenses from this camera to work on the Sony A7 bodies almost as though they were native lenses.  I have found the auto focus and exposure work very well.  Not so much with the TTL flash.  These camera bodies sell for about $35 on eBay.  Make sure you get a good one and maybe pay a bit more.  The batteries are not common, but for sale on the internet at reasonable prices.  I have found the batteries are good for a year or two.  The manual states 15 rolls of film.  I think it is about double that.  I would suspect it depends on how much you use the built in flash.  I bought a very capable high speed sync Minolta flash on eBay for $35.  And I bought the 24mm f2.8 macro lens you see in the picture above on eBay for $80.  The lens is a Sigma/Quantaray.

If you buy one of these in good working condition you will be able to learn to use it in a day.  The manual is on the internet.  It is simple, simple, simple to use.  I would guess you can get a whole kit with one body and three lenses for $150.  A stunning deal.  I already have $4,600 into my Sony A7iii with only two lenses.