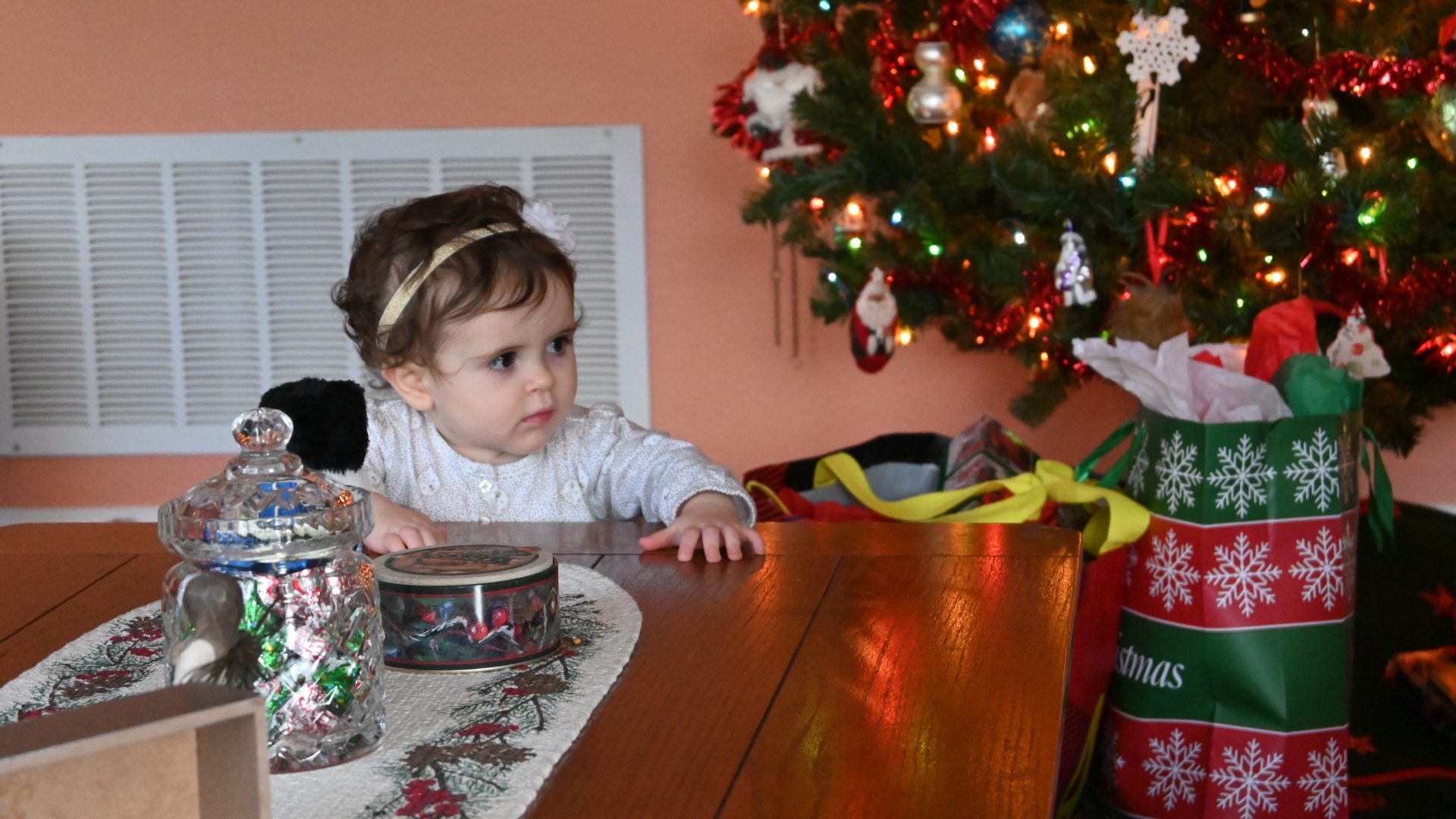 Top image is shot with the Nikon Z 50 and 16-50 mm kit lens with no flash.  This photo is from a camera produced medium jpeg and added to Apple Photos.  No editing other than hitting the Apple enhance feature.  I set the camera white balance to portrait.

Ken Rockwell called the Z 50 in his blog last week, “The World’s Best APS-C Mirrorless Camera.”  I do not have Ken’s depth of experience with other APS-C cameras so I cannot make this same comment, but from my personal experience of using the Z 50 for a month I can say this is the best camera I have purchased in five years.

The above photo was shot jpeg only in camera with the camera on auto.  To me it is a proof of how good a social and events camera this Nikon is.  The camera automatically set exposure on the face of my grand daughter and got near perfect exposure.  I did not use the flash for this shot.  I shot only in jpeg and edited in Apple Photos not Lightroom.  The camera auto adjusted for several stops of back lighting which to me is phenomenal.  I would guess that my iPhone 11 Pro could also have been able to get this shot, but the Nikon is so much easier to use than the iPhone.  I would never have been able to get this photo with one of my film cameras even using flash.  Is this a great portrait shot, no, but considering the back light the result is great.

I have now read and listened to maybe 15 reviews of the Nikon Z 50.  Almost all of these reviews were from people with limited experience with this camera.  One of the big YouTube stars called this camera a “mistake” before even using it.  Another big you tube guy tested the Z 50 before it was released for a couple of hours and said that the 16-50 kit lens was not so good.  But you can see from the two photos on this page that this lens is excellent.  Is it as good as my Nikkor 50mm f1.8 ZS lens?  No, but that lens is a lot bigger and much more money.  And many of the other reviews compared this to the Canon M6 II, Fuji XT-30, and Sony A6100-6400.  They basically run through the specs and say, yada yada yada.

And several of the reviewers who actually bought and spent time with the camera gave this new body very high ratings.  And I will add myself to that list as this is the first camera since I bought the Nikon D5500 in 2015 that I can say without any reservation that this is a great camera system.  The best new camera for me in five years.  Here are some of it’s strong points from MY perspective.

I took the above shot hand held!  And this is a cropped image.  The Z 50 does and excellent job of stabilizing with it’s kit lens.  Keep in mind this is a standard lens and not a macro one.  The detail from the kit lens and Z 50 sensor is excellent.  All the comments about the sensor being only adequate are nonsense.

And the above shot is of the same butterfly on a different bush with the longer 50mm-250mm kit lens.  So this time, lots more bokeh.  I am not sure which shot I like better but both good.

So from my perspective how do I compare the Z 50 with the other three cameras normally seen as it’s closest competitors.

Keep in mind that these are just my opinions based on what I want to do with the camera and on the knowledge I have at hand from personal experience and what I have read and looked at.

The above video was shot of my grand daughter using the kit 16-50 in natural light hand held.  I shot this in 4K 24 but the above insert was downsized to 720 to fit more easily in this blog.

Here is my personal experience with the Z 50 camera and the Sony A7iii I bought in Oct 2018.  The Z 50 was good from the start.  The first shot I put on the 16-50 kit lens, inserted battery, inserted standard SD card, formatted card, turned camera on.  Pointed it at a large photo of my two grand daughters about 12 feet away.  The Nikon grabbed the eye of one of the kids and I pushed the button.  The shot came out very good.  And this is in low light.  The next few days I went and shot in Balboa Park with both lenses and both raw and jpeg turned out great.  The more I used this camera the better I liked it.

I had a much different experience with the highly rated and reviewed Sony A7iii.  I got good still and video files from the beginning, however, after three days I wished I had not bought it.  Even though the body was not that heavy it did not fit my hand well.  Plus the body was not balanced well so when you put a lens on it of any weight it was front heavy.  The A7iii did do a very good job of adapting to my existing Minolta AF lenses.  I liked that.  I set all the buttons to custom settings as most were generically marked.  I slowly started to learn which ones I had set to what.  I never figured out how to properly set the AF system.  Even when I set the AF to center focus the mark in the viewfinder for where the AF point was, was hard to see unlike the Nikon.  The Sony has a number of sub menus on it’s focus settings.  This makes it harder to figure out.  No touch screen.  A big omission.  After two months and still not liking the camera I rented a Nikon Z 7 plus 24-70 f4 and went and shot with it in Balboa Park at familiar locations.  Unlike the Sony the Z 7 was easy to use without reading anything.  I just turned it on and shot with it.  I thought about trading in the Sony right then, but forced myself to keep it for a year.  Towards the end of the year in desperation I bought the Zeiss 35mm f2.8 because of it’s light weight.  I also ordered the Sony battery grip.  The battery grip made it easier to hold the camera but a lot heavier.  On the other hand the Zeiss 35mm was by far the most comfortable to use with the A7iii.  With this lens the camera was OK as far as handling goes.  But I was already too down on the camera and after going to a photo workshop where nearly everyone was shooting Nikon DSLR or mirrorless I just wanted out of the Sony system.  Nikon introduced the Z 50.  I went and bought it on the first day it was at our local camera shop with two lenses.  The whole kit with both lenses was less than $1,200.  That is $100 less than I paid for the Sony 24mm-105mm f4 zoom.

Keep in mind this is based on my personal preferences and cameras are very personal.  Your choice should be based on what you need.  To me cameras are so good these days that there are no bad ones.  Very likely if I did not have a bit of arthritis in my right thumb and if I had not liked the Nikon cameras I owned before the Sony I would have liked the A7iii a lot more.

The Z 50 is a great crop sensor camera for a modest amount of money.  It pairs extremely well with my Nikon Z 7 and I am very satisfied with this duo.  To me the Z 50 really fits into the niche of people who are looking to upgrade their photos and video from a high end iPhone or Android.  The Z 50 will do almost every thing that my iPhone 11 Pro will do and in most cases do it better.  The traditional camera shape of the Z 50 is just so much easier to use and work with than a smartphone.  The Nikon has a real grip and is fun to use.  Since I have been using the Z 50 I have used the camera on my iPhone far less.  What comes out of the Nikon is just normally better than the iPhone.  Plus it is easier to set and use than the iPhone.  You can actually set to Nikon to what you want it to do without having to use the choices Apple makes for me much of the time on the iPhone.  For example the new deep fusion app goes on automatically.  A lot of the time you don’t want it to go on auto.  But no off button.  On the other hand the iPhone is incredibly good at exposure using the native camera app.  But since the Nikon Z 50 came out the iPhone exposure control has a good competitor.  I am not sure yet which is best.

Keep reading my posts to find out.