The Sony A7iii is capable of very good photographs with native E mount glass or adapted Sony A mount glass.

Both of these shots were made to jpeg – fine only and the only edit I did was to import to Apple Photos on my MacBook Pro and hit enhance.  I used auto focus on both and the adapted lens focused perfectly.  The colors here are very accurate.  I used the Sony “standard” setting for jpeg color.

Then I put back on the native Sony Zeiss lens and tried to get a decent shot of this metal Christmas scene.  This is not a good picture, but I am using it to illustrate a point.  I tired the auto focus in wide and it got a bit confused.  So I figured this was a good time to try the manual focus again.  Manual focus for close up shots is really better than auto focus.  So I aimed the camera at where I wanted to focus and slightly turned the focus ring on the Zeiss.  The camera zoomed in and showed me focus peaking.  That made it pretty easy to set focus where I wanted to.  Of course this is a very very complex way to do this. My old Olympus OM2n has manual focus only and you get a very easy to use split focus in the viewfinder.  When the images come together it is in focus.  The Sony is almost as good in regular light and I am sure is much better in low light.  If you zoom into the above photo you can see that it is quite sharp.  And I can tell you the jpeg colors are accurate.

So this afternoon I thought I would take another pass through the menus to try and improve my knowledge of the many settings that are in them.  I put in about an hour before it becomes just too much.  There are far more Sony settings than my last camera.  And from the enthusiasm of the tutorial I was using it seems like I should commit many of them to memory.  But many of the settings interfere with other settings and the number of possibilities is very large.  The Nikon system is far simpler.  I would guess that after a year with this camera body I will still not know most of them.  Adding to the complexity is the fact that only a few of the buttons are labeled.  That means you have to remember where you put the focus settings before you then have to remember which of the settings you have to use.  This system would be much better with a simplified menu that could be controlled by a touch screen.  Since Sony makes smart phones I know they can make touch screens.  And I do know that the back screen in my camera is a partial touch screen.  But I have to go back and read the manual to figure out how it works.

This rainbow turned up outside our house a little after I took the pictures of the Christmas figures with the Sony.  I went outside with the Sony to get a shot of the rainbow, but it was still raining.  And I am not quite sure exactly how weather proof the Sony and Sony lens are.  They are supposed to be OK with some rain, but I am still not sure how much.  The iPhone on the other hand is quite capable of just about any amount of rain with no damage.  As was my Nikon D750.  So the iPhone got this rainbow shot.  The above is smart HDR, and below is just a single shot. 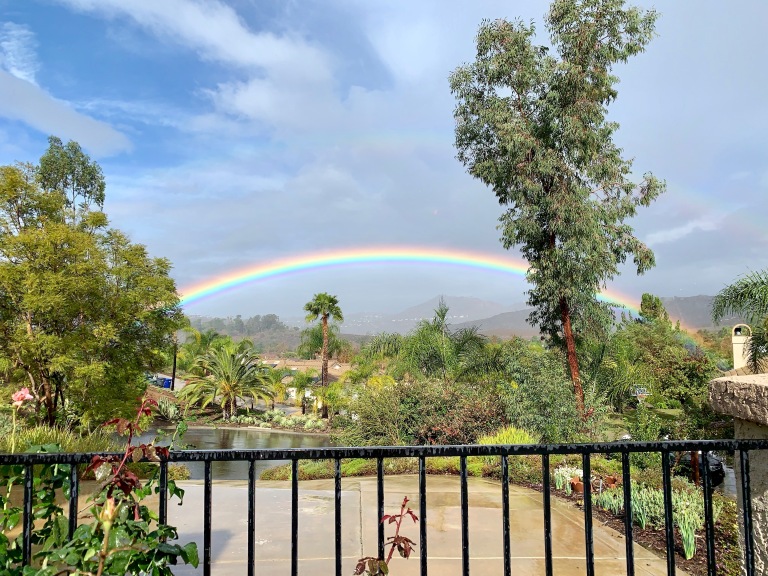 If you look at these two shots on my detailed monitor I am not sure the HDR added anything.  The clouds are not blown with either.

Unlike the Sony the iPhone XS max with the standard apple camera app is easy to understand after a bit of effort.  And the Adobe iPhone camera app is pretty darn simple too.  Adobe has really come a long way to improving this iPhone app over the last year.  A year ago their HDR was terrible, unusable.  Now it works well.  But then Apple has just blown the doors off computational photography with their smart HDR which much of the time really adds something to the finished image with no effort.  I have only had the new iPhone two weeks and I think I am pretty expert at using it.  With the Sony I am OK with the stuff that is basic but World’s away from getting all the complicated things to work.

So here is a message to Sony from me about their A7 line of cameras.  Cut about half of the menu items.  Make the back screen a full touch screen.  And make sure you buy and use an iPhone for a while to see how simple making good photos can be.  And a couple more things.  1.  Why is there no pop up small built in flash.  You fit one on my last inexpensive compact Sony HX 80 so I know you can do it on the A7 bodies.  That type of flash comes in very handy and if it works as well as the Sony HX 80 built in flash that would be great.  2.  Identify the main buttons.  Put labels on them.  3.  A7s should be possible to operate with one hand, they are not.